He spent most of his days asleep in his room. Megara consulted the Oracle of Delphi, and she explained that Hera had planted the seeds of madness inside the mind of her husband. To free himself of the curse, he must perform ten impossible labours in the service of mankind. Some people say that Heracles became insaner still, before he undertook his heroic cure — that he was hot-tempered and cruel to his family. I am not sure that those rumours are true, but I will mention a famous saying about Heracles at this time of his life. It comes from the Greek playwright Euripides and it goes:.

What is clear, is that Heracles took the cure that was prescribed by the Oracle. He presented himself to Eurystheus, king of Tiryns in Mycenae, who was to set his ten impossible tasks. Eurystheus told Heracles about a lion that was the cause of suffering in the land of Nemea. It was attacking not only animals, but people. Heracles' first task was to hunt and kill the Nemean Lion.

Hercules and the Nemean Lion - The Labours of Hercules Ep.02 - Greek Mythology

He hid behind a boulder, and waited for it to come out. Towards evening the lion emerged. Heracles pulled an arrow from his quiver, and set it in his bow. It was a powerful weapon, and it took immense strength just to pull back the string and flex it ready to fire. Heracles took aim and let loose the arrow. It flew towards the lion and caught it in the chest — but instead of piercing his skin, the arrow merely bounced off.

Heracles quickly shot another arrow, and it was just as useless as the one before. Now he understood why the task was all but impossible. The hide of the Nemean Lion was impervious to weapons. The lion looked with curiosity at his bold attacker. Who was this fellow? No ordinary human for sure. Seeing that Heracles was as strong and fierce as himself, he decided to err on the side of caution. He retreated into his cave. The Nemean lion was not only strong, but he was cunning as well.

His vast cave had many tunnels and two openings. If anyone ever pursued him through one entrance, he could always escape out of the other. Heracles had been warned of this by the shepherds. He uprooted a tree, and used its trunk to lever a vast boulder into the opening- now it was sealed.

Inside, he caught sight of its green, gleaming eyes. He grappled and wrestled with the man-eating beast and finally defeated it, killing it with his bare hands. If you have ever seen a picture of Heracles, you will know that he liked to wear a lion skin over his shoulders, and that its mane was a kind of hood over his head.

The ancient world was full of pictures of Heracles, most of them on vases. The lion skin that he wore was, of course, that of the Nemean Lion.

Oh no, there's been an error

When he reported back to Eurystheus, he was wearing his new uniform. He was such a terrifying site that the king hid inside a giant jug, and spoke to the hero from within it. After that, he forbade him to ever come into the city again. In future, he must stand outside the walls to display his trophies.

This one lurked in the swamps of Lerna, and it was known as the Lernaean Hydra. It was giant snake with multiple heads. If you cut off one of its heads, two more would grow in its place. It was indeed a fierce opponent. Even Heracles did not think he could fight this monster on his own. He enlisted the help of his nephew, Iolaus. Heracles fought the Hydra with his sword, and each time he lopped off one of its heads, Iolaus jumped in with a torch and burned the stump before it sprout a couple of new heads.

Heracles and Iolaus stood back to back and fought off both these supernatural beasts. He returned to Eurystheus with news of his victory, but the king was not satisfied. You will know it when you see it. It has little horns, made of gold. The deer was elusive and swift on its feet. Heracles was strong, but not so fast. He spent a year tracking the graceful creature over the hills of Ceryneia.


Artemis, the goddess of hunting, did not approve of humans tracking her dear. When Heracles fired an arrow at her sacred dear, she was angry. Even though she was a goddess, she feared the strength in the arms of the son of Zeus. She brought Apollo along for moral support.

The golden god of light appeared before Heracles and said,. Shooting the sacred dear of Artemis is not allowed. Apollo knew very well that Heracles was no ordinary man, but the son of Zeus. He consulted with Artemis and they agreed on a compromise.

He could take the sacred dear to Eurystheus alive, but then he must let it go. That was how Heracles completed his third labour and reported back to the king of Tiryns. Now you must take on a more dangerous foe. A wild boar is terrorising the people of Erymanthia. Your fourth task is to defeat the Erymanthian Boar. And so Heracles set off once more across the part of Greece that is called the Peloponnese.

It is the land where the wonderful civilisation of the Mycenaeans was based.

Later on, the people of the Peloponnese were called the Spartans, but in the time of heroes, there were many more small city states. Centaurs were strange hybrids, half horse and half human. There he was entertained by a centaur called Pholus. His host offered him raw meat, but Heracles was a fussy eater and said he preferred it cooked on the fire. Then he called for wine. Pholus was afraid to open the wine jar, because it was owned by all the centaurs in common.

Heracles laughed and told him not to be so timid. So the two opened the jar and drank the wine. When the other centaurs smelled roast meat, they came to see which human was visiting their land.

They found Heracles and Pholus drinking their favourite wine and they were angry. Soon a mob of centaurs were hurling rocks and Fir trees at the pair. Heracles easily fought them off, and chased the hooligan horses as far as Malea, before letting them go. After the little diversion with the centaurs and the wine, he resumed his labour.

He found the Erymanthian Boar, and backed it into a hollow. 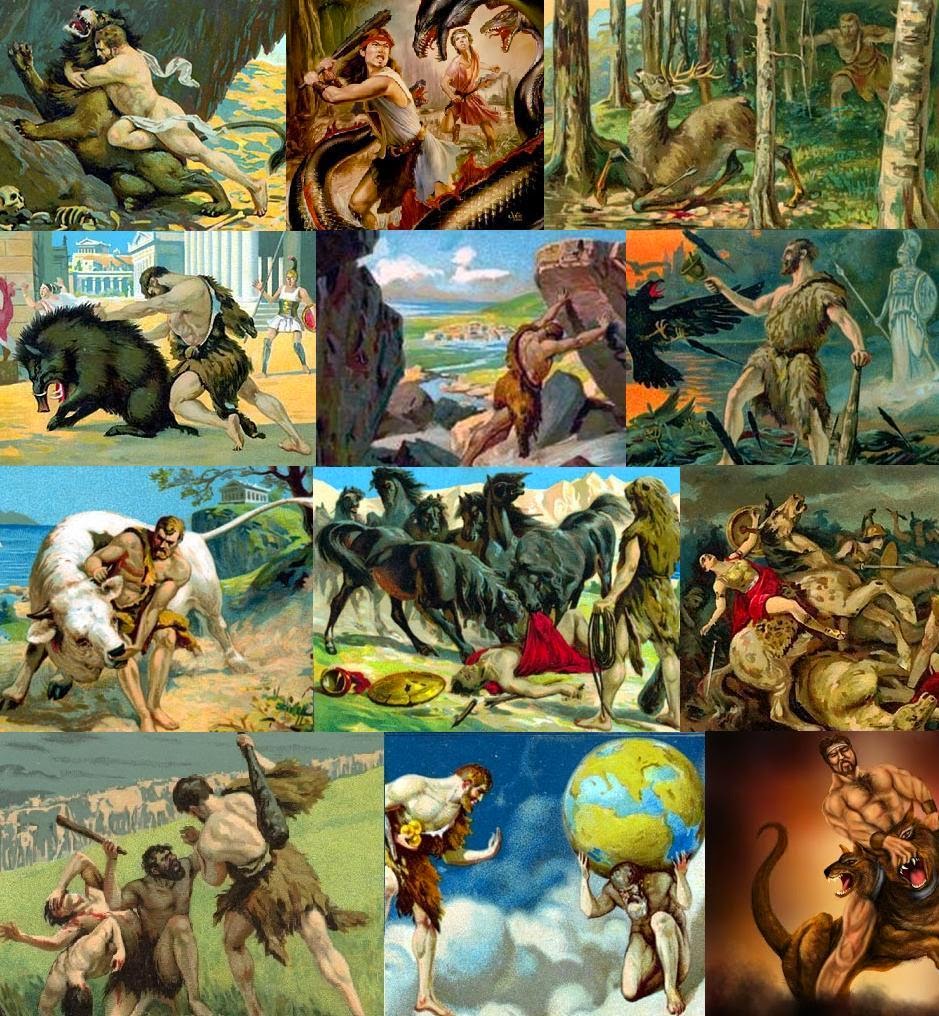 The cornered creature tried to charge Heracles with its tusks, but that was a mistake. The hero bopped it on the head with a rock and knocked it out. He then trussed up the unconscious pig, and carried it back to Mycenae.